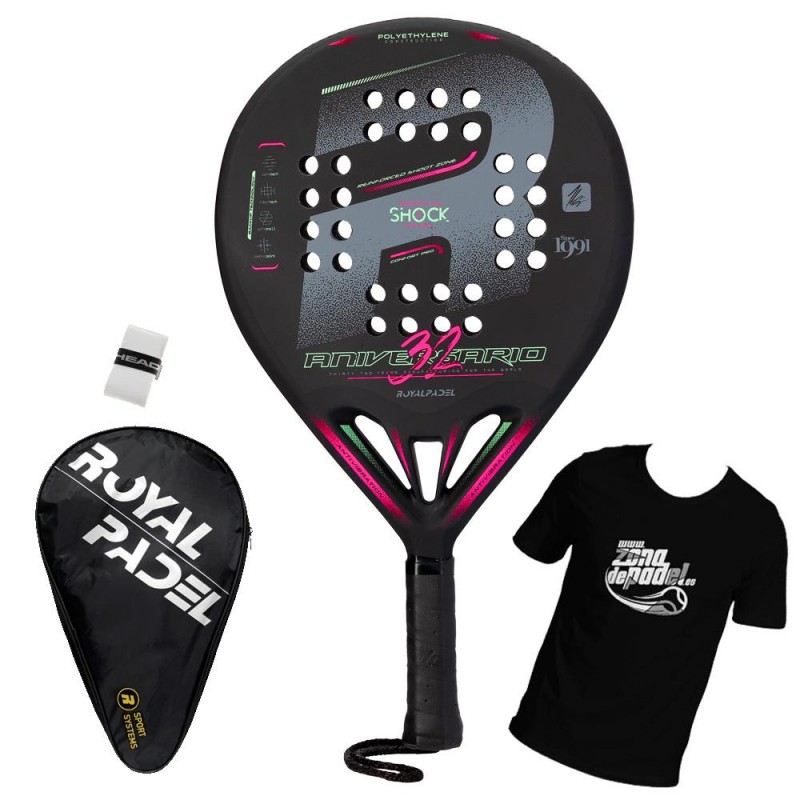 Greater comfort and lightness with this Royal Padel women's racket, a high-performance model that stands out for its control, manageability and design
Take a look:

Enjoy the best sensations on the court with the new Royal Padel 2022 collection. In it you will find models for all audiences, such as the RP 32 Aniversario Woman pink padel racket. It is a racket for women that shares technologies with the 32nd Anniversary Poly but adapted for female players.

Thus, it has a lower weight in addition to polyethylene rubber in the core for a softer touch. For the external structure, fiberglass has been used, reinforcing the tubular with carbon. It also comes back with sandpaper-like roughness, which will improve the effects.

Who is it for? We recommend it to advanced level girls who compete regularly, who are looking for a control padel racket, with a wide sweet spot and a soft touch to be able to correct off-center hits and prepare the point from behind.

Why will you like it? Because it minimizes vibrations thanks to the soft rubber inside and the shock absorption system, so you won't notice any discomfort in your arm. In addition, its black and pink design is the most beautiful, you will shine on the track!

Discover the new Royal Padel catalogue, one of the most experienced brands in the world of padel tennis. This season it incorporates new technologies and materials in its products, all of them adapted to all levels and playing styles of the players.

It also has representation on the World Padel Tour tracks with some players such as, for example, Adrià Mercadal, Aranza Osorio or Jordi Juan. Do like them and enjoy the best sensations on the court with the new RP 2022 rackets.