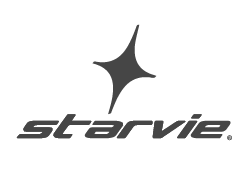 Star Vie padel rackets of the highest quality and innovation that have been positioned in the course of these years in the professional circuit thanks to the great results they have given, differentiating three ranges, Universe, Premium and Star. Star Vie has been able to manufacture with a great quality at a very competitive price considering that the manufacture is in Spain.

Buy your shovel in our online store and take it at the cheapest price on the market with free shipping and also with gifts.

The padel rackets of our beloved brand are classified into two categories mainly depending on the type of player who will carry them, control and multipurpose.

The main differences are the materials used that would become the ranges, being the padel racket Star Vie brava 9.1 the most acclaimed, although in 2022 it will be replaced by the Triton Pro range and the Triton, the difference between both is the type of rubber.

When we talk about buying a Star Vie padel racket , we must take into account several factors, since for what some may be good, it is possible that for others it does not seem of such quality.

Our recommendation if you are going to choose a racket is that you first look at what type of game you have, to choose a control or multipurpose one and then you should see the level of play you have, depending on these two variables you can look for rackets for advanced players or intermediate.

Hardness Padel rackets Star Vie : As a general rule, they are manufactured in two hardnesses, hard and then we have the soft series which is a softer EVA rubber, so you have two clear options when choosing.

Frank Stupa's shovel, the Star Vie Raptor Evolution 2022 , is possibly one of the best models that will get the most talk this season, since the rising streak of the No. 10 player on the professional circuit is more than enough to catapult this model, With a design in black and silver colors, it also has a bestial sweet spot.

The Basalt Osiris is another of the models that give durability, in the last season they gave a lot to talk about and liked a lot, they are control models that have manufacturing materials that are not usually seen in products, although this time they have worked on the basalt quite well, achieving excellent results.

StarVie the brand of the padel star

Star players who play with StarVie Padel , such as Carolina Navarro, Frank Stupa, Fernando Poggi, Cecilia Reiter or the Alayeto sisters among others.

In previous years these players have played with Soft 2018 because it is ideal for women because of the touch it has and because it is more comfortable for girls.

The Carbon Pro has been another of the models that they always like because having carbon on the entire surface they like them a lot and they fire a lot.

Although the StarVie Padel rackets are difficult to find in any online store, in our case it has the latest seasonal offers, once they are finished there will be no more units in stock. Therefore, if you are interested, we recommend that you buy it as soon as possible since the stock runs out quickly.

Remember that for the purchase of a seasonal shovel we give you a t-shirt and a pot of balls, of course most models have a cover, but if you have doubts, it is best to call the store and an advisor will solve all the doubts you can. have, as well as recommending the best option based on your level of play.